Having spent the morning at Mount Hope Cemetery visiting the grave of Susan B. Anthony, my husband and two girls continued our cold and damp selves to the destination I was most excited about. In fact, we completely reworked our trip because our first plans had us in town when the museum was closed.

I learned about the museum from my husband who stopped there after finding it on an atlas while on a trip to meet Natalie Merchant at a book signing in Massachusetts. He brought home pictures, brochures, and awesome gift shop goodies, prompting me to want to take the trip.

The museum (also called Visitor Center) is the home base of the Women’s Rights National Historical Park, New York. It’s located on the main street in town with street parking close to cute shops and restaurants.

The museum is on two floors. The first floor contains a theater, park ranger station with lots of information, a gift shop, and 20 life-size bronze statues of the organizers and supporters of the first women’s convention that took place next door in Wesleyan Chapel in 1848.

The Guntzel Theater has a 28-minute film called “Dreams of Equality” that is also available for purchase in the gift shop (and I did).

The First Wave Statue Exhibit is wonderful and its 360 degrees. The statues pull you in to take a picture with them. We snapped a picture next to Elizabeth Cady Stanton, Frederick Douglas, and Martha Wright. 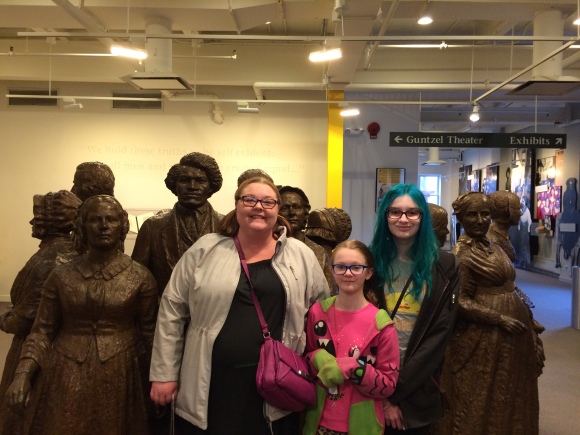 On your way upstairs there are amazing pictures of women from all backgrounds, occupations, and races. Some famous, most just awesome women whether they are protesting, climbing mountains, teaching children, or hunting.

Upstairs has a series of stations. The balance between enlightening, empowering and heart-breaking. Here are a few of them.

“Birth of an Idea” Station

A plaque tells the story about how Elizabeth Cady Stanton and Lucretia Mott met in 1840 at the World Anti-Slavery Convention in London and were sent to the back of the hall because they were women. Anger is energy and these two women decided to hold their own convention and advocate the rights of women, which became the First Women’s Rights Convention. A possible podium from that convention is on display.

“What Rights Did Married Women Have?” Station

This one shook me to my core. The idea that women were exchanging their husband’s “support and protection” to lose the ability to own property and their children, not to mention that “husbands gained the right to beat wives with any whip not thicker than a thumb.”

I learned the term “bloomers” came from Amelia Bloomer who had a newspaper, The Lily, and wrote about temperance and later about women’s rights. She was big into dress reform and created a pantaloons-and-tunic outfit (today equivalent to my personal uniform of a dress with leggings). She published the pattern in her newspaper and the look took off. Even Susan B. Anthony rocked the ensemble for a time. However, people made fun of it. Bloomers took away from the message and put attention on the messenger’s outfit, so it died out.

What has been in-and-out of fashion is corsets. I still see today them at geek conventions as well as underwear stores in the mall. Back when they were an everyday outfit for women of all social standing, the corsets would actually change the shape of the rib cage causing a terrifying deformity causing me to ask how does that effect your internal organs?

My youngest liked clicking the buttons on this interactive portion that show the current pay inequality for women in various careers and positions. She was unhappy with the discrepancy in pay, but she also understands that knowledge is power. If you’d like to learn more about current pay inequality Hired.com has released a study.

I’m a big fan of the snarky buttons of the women’s movement like “Uppity Women Unite” and “He’s Pretty But Can He Type” fits my sarcastic sense of humor. I found it fascinating that first there were (less snarky) tokens. One at the museum was shown with a woman in bondage with the words “Am I not a woman & a sister”

These are about 1/3 of the stations available on the second floor. It feels small in square footage but it’s immense in women’s history. Every turn there was something new to learn about.

Next door to the museum is Declaration Park with outdoor seating as well as Wesleyan Chapel. The chapel was closed due to low staffing but it has been restored and looks lovely.

Down the street is Elizabeth Cady Stanton’s home which is open seasonally for tours. Across the water is a statue of when Susan B. Anthony met Elisabeth Cady Stanton. I talk about their amazing friendship in a previous travel story. A combination of season closings and the weather not being in our favor, had us miss out on these.

History of the First Women’s Convention

The First Women’s Rights Convention was held July 19-20, 1848 at the Wesleyan Chapel in Seneca Falls, NY. The idea came when Elizabeth Cady Stanton and Lucretia Mott were sent to the back of the hall during an anti-slavery convention in London. They got together with 3 more gals (Martha Wright, Mary Ann M’Clintock and Jane Hunt) and put together, in 10 days, a convention that over 100 people attended. It was the birth of the women’s movement in the United States.

They agreed on a Declaration of Sentiments modeled after the Declaration of Independence. 100 women and men signed the Declaration at the end of the convention. Some, including Amelia Bloomer, thought it was “too radical a resolution” and didn’t sign. Amelia seemingly changed her mind about women’s suffrage in later years.

The convention led to women and men working together for civil rights, workers’ rights, and voters’ rights. Seeing how far we’ve come and still how far we have to go keeps the spirit of the first women’s rights convention a site worth experiencing.

Here is something interesting that was in the back of my mind while at the museum, where is the original document of the Declaration of Sentiments?  Further research shocked me… it’s missing. Seriously. It’s missing. In 2015 the White House asked for your help with the #findthesentiments. Here is the archive and the mystery. So my fellow Indiana Jones and National Treasure explorers, get on this because the Declaration of Sentiments… “it belongs in a museum.”

Recommended Reading List about women’s rights in Seneca Falls and beyond.

Start the day in Rochester, NY

12-minute drive to
Mount Hope Cemetery (Susan B. Anthony and Fredrick Douglass graves) 1133 Mt Hope Ave, Rochester, NY 14620
Allow as much time as you need to pay your respects. No admission fees but there are open gate hours listed on Google.

25-minute drive to Auburn, NY
Harriet Tubman House & Museum, 180 S Street Rd, Auburn, NY 13021
Allow 30 minutes for the museum, tours have starting times. Museum was free (we left a donation) not sure on the tour as we had missed the last one. Website

5-minute drive to
Fort Hill Cemetery (Harriet Tubman’s grave) 19 Fort St, Auburn, NY 13021
Allow as much time as you need to pay your respects. No admission fees but there are open gate hours listed on Google. Website