Learn about a hard working gal who created a hair care line that made her one of the most successful African-American business owners of her time. She was an entrepreneur, a philanthropist, and an activist. Get ready for the amazing life and legacy of your gal, Madam CJ Walker.

Learn about Madam in less than 3 minutes

CLICK HERE FOR THE FULL PODCAST EPISODE IN AN AUDIO PLAYER ON YOUR COMPUTER/DEVICE. OR THE YOU TUBE LINK BELOW.

Madam CJ Walker was born as Sarah Breedlove on December 23, 1867, near Delta, Louisiana. Her father was Owen Breedlove and her mother was Minerva Anderson Breedlove. Sarah was one of six children with one sister and 4 brothers. Madam’s parents and her older siblings were slaves but but Madam was actually the first child in her family to be born into freedom after the Emancipation Proclamation was signed.

Her mother died in 1872 and her father remarried, but he later died as well. Madam was orphaned at the young age of seven. Madam moved to Vicksburg, Mississippi. She started working as a house maid when she was very young.

When Madam was only 14 years old, she married Moses McWilliams. This was her opportunity to escape abuse by her brother-in-law. At age 17, Madam gave birth to a daughter. Born Lelia but later, like her mom, changed her name to A’Lelia.

At age 20, Moses died and her daughter was two years old. Widowed and a single mother Madam moved to St. Louis.

Madam’s four brothers were settled in St. Louis and working as barbers. Madam found work as a Laundress.

During this time she has having some real trouble with her hair. She not only had dandruff but her hair was falling out and she was beginning to lose most of it. She was not alone in this, many African-American women would experience this because of the not only in frequent bathing due to lack of indoor plumbing but also products containing lye that were harmful to the skin.

Madam talked to her brothers, tried products available like those of Annie Malone, another African-American woman entrepreneur, but she also starting making home remedies.

In 1904 Madam started as agent selling products for Annie Malone who was the owner of the Poro Company. She learned the business and also what was working and what wasn’t.

For 18 years, Madam and her daughter lived in St. Louis. The city was entranced with beginnings of ragtime music. Madam sang at her church and fostered friendships with African-American women in the church but also the National Association of Colored Women. The NACW was started in 1896 by Josephine St. Pierre Ruffin and Mary Church Terrell. Their motto was “Lifting as we climb.” Harriet Tubman and Ida B. Wells were also founding members.

In July 1905, when she was thirty-seven years old, Madam and her daughter moved to Denver, Colorado, where she continued to sell products for Malone and develop her own hair-care business. Madam soon after established her company and began selling her products door-to-door.

In 1906 she married Charles Walker who was a newspaper salesman. FamousInventors.org lists that it was his idea for Madam to change her name to “sound more distinctive.” So she took the initials of his name C and J and took his last name. She also added “madam” to her title which is said to be a nod to the French beauty industry booming across the Atlantic.

Madam Walker trained women to become “beauty culturists” while her husband handled the advertising and promotion for the business. She groomed her sales agents, taught them the art of selling, and organized them into local and state clubs, along the same lines as the set up of the National Association of Colored Women.

In 1906 Madam put her daughter in charge of the mail-order operation in Denver while she and her husband traveled throughout the southern and eastern United States to expand the business.

In 1908 Madam, A’Leila, and Charles relocated to Pittsburgh, Pennsylvania, where they opened a beauty parlor and established Lelia College to train “hair culturists.” A’Lelia ran the day-to-day operations from Pittsburgh, while Madam established a new base in Indianapolis. 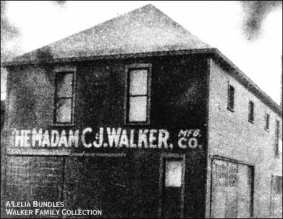 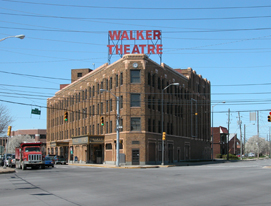 It would be in Indianapolis that Madam would build a factory, a hair & manicure salon and another training school. Her philanthropy and investment in African-American community made headlines when she donated $1,000 to the building of a Colored YMCA in Indianapolis. Locally she also helped the Flanner House and Bethel African Methodist Episcopal Church.

The Walker Theater was built in 1927, after Madam’s death, the building was the new headquarters and manufacturing site for the continuing sale of the product line. Once employing 3,000 women, the building also included a ballroom, a theater, and hair salon along with corporate offices. It’s a unique building in a flatiron design. Not only that but it has amazing fusion of art deco and African art inside and out. The building is still in use today and hosts many concerts, the Spirit Awards, has tours available and rents offices to non profits and entrepreneurs.

Madam understood the power of advertising and brand awareness. Heavy advertising, primarily in African American newspapers and magazines, in addition to her frequent travels to promote her products, helped make Madam and her products well known in the United States. Madam became even more widely known by the 1920s as her business market expanded beyond the United States to Cuba, Jamaica, Haiti, Panama, and Costa Rica.

The first bit of activism was in 1912 she spoke up on the convention floor at the National Negro Business League saying, “I am a woman who came from the cotton fields of the South. From there I was promoted to the washtub. From there, I was promoted the cook kitchen. And from there, I promoted myself into the business of manufacturing hair good and preparations. I have built my own factory on my own ground.” The next year she was the keynote speaker. (More on this event in the podcast) 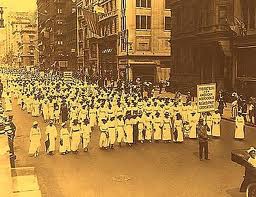 When Madam moved to New York in 1916 she became more active in political matters. She gave more speech and lectures many sponsored by powerful black institutions. She joined the NAACP and was a member of the 1917 Negro Silent Protest Parade Committee. Sparked by a lynching event that lead to the death of 39 African-American’s in East St. Louis, Illinois. The silent protest had 8,000 participants.

Madam joined a group of Harlem leaders who visited the White House to present a petition calling for federal anti-lynching legislation.

She also encouraged activism in her agents as well even giving awards to those who donated to charitable causes.

When Madam became successful she did everything she could to help the black community. Starting with helping raising funds to establish a colored branch of the YMCA in Indianapolis.

Madam also invested scholarship funds to multiple different institutes so that other young African Americans to had a solid foundation in education. She believed in investing in youth to brighten the future. Madam was also a patron of the arts and purchased art from the black community whenever she traveled.

Prior to her death in 1919, Madam pledged $5,000 to the NAACP’s anti-lynching fund. At the time it was the largest gift from an individual that the NAACP had ever received.

Madam gave nearly $100,000 to orphanages, institutions, and individuals. In her will and testament she directed one-third of future net profits from her estate to go to charity. 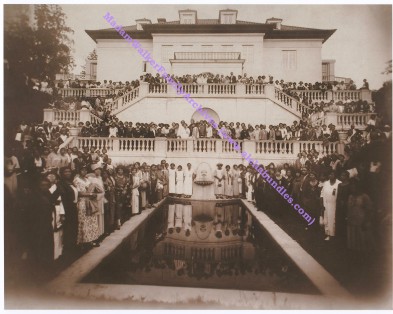 In 1918 Madam moved to Villa Lewaro not far from the two richest men in history, John D. Rockfeller and railroad barron Jay Gould. She died in her home a year later. She died of kidney failure and hypertension complications. She was only 51 years old. She’s buried in Woodlawn Cemetery in NYC.

She was considered to be the wealthiest African-American woman in America. She has been said to be the first female self-made millionaire. Madam said two years before her death that she, “was not yet a millionaire but hoped to be some time.” Her estate was valued at at $600,000 however if we take account to present-day dollars that would be approx 8 million dollars. Perhaps that’s the “some day,” she talked about.

Her daughter, A’Lelia became president of the Madam CJ Walker Manufacturing Company. The great depression unfortunately caused many hardships for the company.

You can find her products of Sephora in vibrate colors with a wonderful history about Madam. This means there are also You Tube product reviews as well, which we think Madam would have loved.

Madam’s legacy continues thanks to the Sephora selling her product line but also the work of the Walker Legacy and her great-great-granddaughter A’Lelia Bundles.

Walker Legacy focuses on career development, entrepreneurship and inspiration for enterprising women of color. Check out their see the amazing programs, events they offer.

A’Lelia Bundles has collected many stories, artifacts and keeps her great-great grandmother’s legacy alive. She has four books about Madam and is working on a fifth book about her name sake, Madam’s daughter, A’ Leila.

We also want to thank MadamCJWalker.com who has been a wonderful treasure trove of information to learn about this amazing gal. 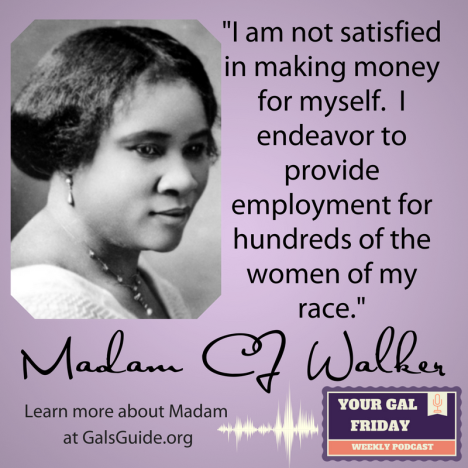 Your Gal Friday is a weekly podcast with supplemental video and article profiling and amazing gal of our galaxy that we can all learn from. Each month your hosts Kate Chaplin & Phoebe Frear talk about the life and legacy about a gal in the subjects of art, history, science and culture. Winner of Best Family Podcast by Indy PopCon Podcast Awards.

One reply on “Madam CJ Walker – Your Gal Friday”