Today we are talking about a gal who known as the Mother of Social Work. She founded the template for what is the modern day YMCA or Boys & Girls Club. Her settlement known as Hull House utilized the neighborhood for social and civic change.  She was a pacifist and an activist for peace and in 1931 she was the first American woman to receive the Nobel Peace Prize. Today we’re going to talk about the life and legacy of Your Gal, Jane Addams.

Jane Addams was born on September 6, 1860 in Cedarville, Illinois. She was the youngest out of eight children. Jane’s mother, Sarah Addams, died when Jane was only two years old. Tragedy continued as half of her siblings died before Jane was 8 years old.

When Jane was only four she contracted tuberculosis in her spine, otherwise known as Pott’s Disease. This gave her a curvature of the spine and gave her a limp. Jane spent her life believing that she was ugly.

Jane adored her father, John Huy Addams. He was an agricultural businessman, the president of The Second National Bank of Freeport, a founding member of the Illinois Republican Party and a Illinois State Senator where he supported the election of his friend, Abraham Lincoln.

John Addams remarried in 1868, when Jane was eight years old. His second wife, Anna Hostetter Haldeman, was also a widower.

Jane had a big heart and a large for empathy for others. When she was a teen, she had big dreams for her life. After reading books and watching her mother’s kindness and her fathers major accomplishments, Jane decided that she wanted to help other people and decided she wanted to be a doctor.

Her father encouraged her to attend a college closer to home to start and so she attended Rockford Female Seminary and graduated in 1881. She met Ellen Gates Starr who would become her good friend and for a time partner.

The summer after graduation her father died unexpectedly from appendicitis she and her siblings inherited $50,000 (equivalent to $1.24 million today).

Jane moved to Philadelphia to attend the Women’s Medical College of Philadelphia where she completed her first year of medical school before health problems and a nervous breakdown caused her to leave school and move back to Cedarville.

Her brother-in-law performed surgery on her back in attempts to straighten it and then advised her to forget school and travel instead.

Starting in August of 1883 Jane traveled Europe for two years with various family and friends including Ellen Star. When she came back she was feeling the pressure of her future, her failure at being a doctor, and not wanting the life of a well-to-do-woman.

In 1887 Jane read a magazine that featured an article talking about Settlement Houses in England. Settlement Houses were was communities in poor suburban areas where volunteer middle class citizens would all live as settlement workers and they would help try and alleviate the poverty of the low income neighborhood. They would provide services like day care, schooling and healthcare. Jane had visited and was enchanted with the idea of bringing a settlement house to America.

At first Hull House was a residence of 25 women it would later be a 13 building complex visited by 2,000 people a week. Located in heavy pocket of immigrants in Chicago, Hull House had a “night school for adults, clubs for older children, a public kitchen, an art gallery, a gym…. a bathhouse, a book bindery, music [education], a drama [club], apartments, a library, meeting rooms… an employment bureau and a lunchroom.”

It was a lifeline to the immigrant population in the area because it offered training and community events. On the east and west of Hull House was the Italian population, to the south was Germans & Jews, North was Greek and Irish and in the Northwest a Canadian-French population. All these pockets that would normally stick to themselves had in common Hull House.

“As Hull House grew, and the relationship with the neighborhood deepened, that opportunity became less of a comfort to the poor and more of an outlet of expression and exchange of different cultures and diverse communities.”

Hull House was also a center for research, study, and a center for the neighborhood. “Residents would conduction investigations on housing, midwifery, fatigue, tuberculosis, typhoid, garbage collection, drugs, and truancy.” Basically if it was affecting the neighborhood in a negative way, the residents were coming up with practical solutions. And the world took notice.

Children were an important focus for the Hull House. Addams argued in her book The Spirit of Youth and the City Streets that play and recreation programs are needed because cities are destroying the spirit of youth. They had multiple programs for kids for art, language, reading, and of course play time.

Hull House today is a museum with two buildings still standing and open for tours and events.

One thing that really helped Hull House was Mary Rozet Smith. Mary was a well-off lady and was a student of Ellen’s. When Mary volunteered to teach a kindergarten class at Hull House Jane and Mary became quite close they would be close companions until the end of their lives. Mary was primary source of emotional support in Jane’s life as well as her critique, advice and financial support.

Jane & Mary’s relationship was many of the college-educated women of this time. Few choose to marry and instead give their life to their work and their female companions. The unique environment at Hull House allowed both men and woman to break from social norms.

When it comes to women’s rights, she was a large supporter. Though because of her friendship with philosopher John Dewey, she felt it more about duty and less about rights for women. Jane was influential of middle and upper class women to use their leisure to become involved with what she called “civic housekeeping.” There was a Women’s Club at Hull House and in 1894 they reported over a thousand health department violations to the city council and reduced death and disease.

In 1915 she was elected national chairman of the Woman’s Peace Party and attended the International Congress of Women in The Hague that April. The meeting of 10 countries was in effort to end WW1 (of which the US wouldn’t enter for 2 more years). Emily Balch wrote this about Jane at the event:

“Miss Addams shines, so respectful of everyone’s views, so eager to understand and sympathize, so patient of anarchy and even ego, yet always there, strong, wise and in the lead. No ‘managing’, no keeping dark and bringing things subtly to pass, just a radiating wisdom and power of judgement.”

However not everyone thought she was a shining example of wisdom and judgement. Her speech on pacifism that year at Carnegie Hall got negative coverage by the papers and even the NY Times branded her unpatriotic.

She continued with the Hague Congress until 1919 and then it developed into the Women’s International League for Peace and Freedom.

In 1931 Jane was the first U.S. woman to receive the Nobel Peace Prize. Jane was awarded for her  “expression of an essentially American democracy.” She donated her share of the prize money to the Women’s International League for Peace and Freedom.

Although she received the prize in 1931, she was not able to attend the ceremony. She was very ill due to a heart attack that she never recovered from fully, and her doctor recommended that she not travel.

Mary was at Jane’s side during her her heart attack and recovery. Historians says that Mary neglected her own health to take care of Jane. In 1934 Mary died of pneumonia after 40 years together. Jane was too sick to attend her memorial so the memorial was held in their home so that Jane could hear from the second-floor room.

Jane would die a year later after an operation revealed that she had cancer and no one knew it.

Kate and Phoebe talk more about Jane’s legacy and what they learned from her amazing life in this week’s podcast. Click here to listen. 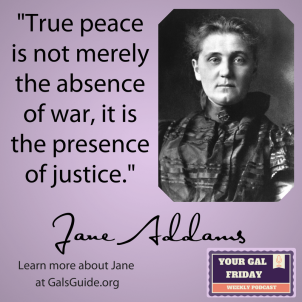 One reply on “Jane Addams – Your Gal Friday”