Today we’re going to talk about a remarkable rebel. Born into slavery, she not only escaped but she made 13 rescue missions to save family and friends. In the Civil War she was a nurse, an armed scout and a spy. She was the first woman to lead war-time troops. She was speaker for abolition, women’s rights, temperance, and civil rights. Today we are talking about the life and legacy of Your Gal, Harriet Tubman. 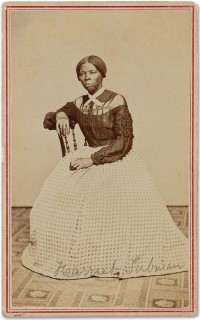 Born a slave in Maryland between 1820-1825 her name was Araminta “Minty” Ross. Harriet is actually her mother’s name.

Harriet had nine brothers and sisters. Three of her sisters were sold off and separated from the family. When slave traders came for her brother Moses, it is said that Harriet’s mother hid Moses and threatened to hurt anyone who entered her home trying to take him. It’s possible this is where Harriet saw that resistance and “good trouble” can work.

When Harriet was around the age of 12, she was sent to a dry-good store where she witnessed a a slave was trying to escape. The overseer told Harriet to tie up the slave so that he could be punished. Many stories says she refused, others say she went as far to block the door and give time for the slave to run away.

The overseer threw a 2 pound metal weight, meaning to hit the escaping slave but it hit Harriet’s head instead. Harriet said this had “broke her skull”. She later explained her belief that her hair – which “had never been combed and … stood out like a bushel basket” – might have saved her life. After a couple days of recovery without medical treatment Harriet was sent back out to the fields. She started having dizzy spells and her owner didn’t find it worth it to keep paying for her and so he sent her back.

Harriet also had epileptic seizures, narcolepsy, headaches and visions would last the rest of her life.  Harriet was a devout Christian and took her “visions” as hearing from God. This also could have been a result of her injury.

Around 1844 she married John Tubman (a free black man), who seemed to accept his place in life and didn’t want Harriet to cause any trouble or try to escape. She did. It was also around this time that she started go by Harriet, her mother’s name. Harriet and two of her brothers fled in 1849 after the death of their slave owner. Not wanting to wait around to see what the will or widow would do they fled, but her brothers had second thoughts and returned. Harriet soon escaped again (this time without her brothers) and she made it to Pennsylvania. While her exact route is unknown, This is when she found and made use of the Underground Railroad. (More about the Underground Railroad in the podcast.) 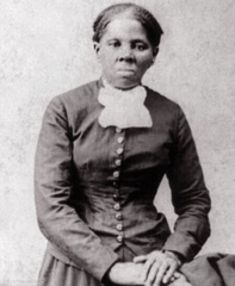 When Harriet made it to Philadelphia she worked and saved money as she made plans to save her family from slavery. In 1850 Harriet went back to save her sister and her family and brought them back to Philadelphia. The next spring Harriet helped her brother Moses and two others escape. Harriet became more confident and helped more and more people.

In 1850 Harriet was named an official “conductor” of the Underground Railroad. Over the course of 8 years Harriet went back and forth between Maryland and Canada freeing around 300 slaves and took 13-19 trips. Harriet said, “I was conductor of the Underground Railroad for eight years, and I can say what most conductors can’t say – I never ran my train off the track and I never lost a passenger.” 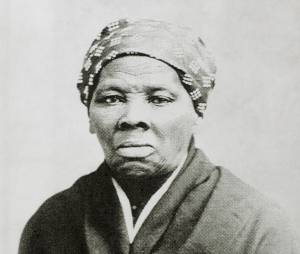 When the Civil War broke out in 1861 Harriet joined a group of Boston and Philadelphia abolitionists and assisted fugitive slaves in Port Royal, South Carolina as a nurse.

With the Emancipation Proclamation in 1863 Harriet was determined to liberate black men, women and children from slavery. She became a scout and a spy for the Union. Harriet used the ability to appear to be an injured, maybe frail, to her advantage. No one suspected her. She lead a band of scouts mapped the areas and provided key intelligence that would aid in the capture of Jacksonville, FL.

Also in 1863 Harriet worked with Colonel James Montgomery with an assault on plantations for the Combahee River Raid. Harriet knew the area, she knew she could get in before the plantation masters had any idea of what was going on. She knew she could rescue slaves and lead them to freedom. Under Colonel Montgomery’s orders and as a key adviser, Harriet became the first woman to lead an armed assault. She guided three steamboats to avoid Confederate mines, set fire to plantations, seize food and supplies, and rescued more than 750 slaves. Her name was in the newspapers and her heroics inspired newly-liberated men to join the Union Army. As Harriet said later “I had never seen such a sight.” 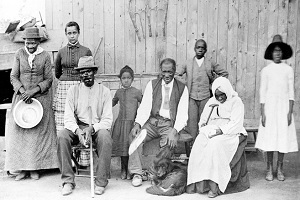 After the war Harriet met and married, Nelson Davis. Later they adopted a little girl named Gertie and raised her together. Harriet and Nelson had 20 years together before Nelson caught tuberculosis and died in 1888.

Harriet struggled for a long time with receiving adequate funds in order to survive, even with all of her work for the people in her country. She did not receive a government pension until her husband Nelson died. After which she received a government widow’s pension of $8. In 1898, Harriet petitioned the Congress for benefits for her own service in the Civil War, outlining her “responsibilities during the war”. In 1899, after receiving numerous documents and letters to support Tubman’s claims, the U.S. Congress passed and President William McKinley signed a law which “authorized an increase of Tubman’s pension to twenty dollars per month for her service as a nurse.”

When it comes to Women’s Rights, from the 1860’s to the 1900’s Harriet Tubman spoke out in favor of women’s rights to vote in suffragette meetings and events in New York, Boston and Washington DC.

Harriet spoke of her own life as a fight for equality but also those sacrifices of countless women throughout history as evidence the women were deserving of equality to men. She was friends Susan B. Anthony who lived not too far from her in NY. They not only both spoke at Women’s meetings together but Susan also helped Harriet with the Underground Railroad.

As Harriet lay dying she she appealed to the suffrage organizer Mary Talbert, to “tell the women to stand together for God will never forsaken us.”

Harriet died of pneumonia in 1913, around the age of 90;  before seeing the women reach the right to vote but after the freedom of her people.

Kate and Phoebe talk about the legacy Harriet left behind as well as what they learned from her in this week’s podcast. Listen Here. 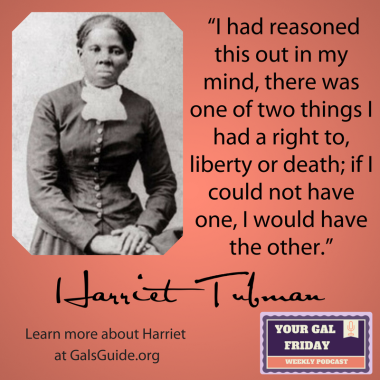 […] At an early age Susan was fighting against slavery. In 1851, she played a key role in organizing an anti-slavery convention in Rochester. She was also part of the Underground Railroad. An entry in her diary in 1861 read, “Fitted out a fugitive slave for Canada with the help of Harriet Tubman.”  […]

[…] A remarkable rebel. Born into slavery, she not only escaped but she made 13 rescue missions to save family and friends. In the Civil War, she was a nurse, an armed scout, and a spy. She was the first woman to lead war-time troops. She was a speaker for abolition, women’s rights, temperance, and civil rights. Today we are talking about the life and legacy of Your Gal, Harriet Tubman. […]

This website was… how do you say it? Relevant!! Finally I have found something that helped me. Many thanks!