Learn about the astronomer who, in a time when women couldn’t vote and were rarely accepted for their scientific minds, classified the stars in a system that is still used today.  We’re uncovering the life and legacy of your gal, Annie Jump Cannon.

Learn about Annie in less than 3 minutes

CLICK HERE FOR THE FULL PODCAST EPISODE IN AN AUDIO PLAYER ON YOUR COMPUTER/DEVICE. OR THE YOU TUBE LINK BELOW.

Annie Jump Cannon was born on December 11, 1863, in Dover, Delaware. Her father was Wilson Cannon, a Delaware shipbuilder and state senator. Her mother was Mary Jump, who was Wilson’s second wife. Annie’s mother was the first person to teach her about constellations and encouraged her to follow her own interests, suggesting that she pursue studies in math, chemistry, and biology.

Annie suffered a handicap in her youth — she was very hard of hearing. Sources vary on the time frame and actual cause, although it is sometimes attributed to scarlet fever which is said that she contracted while at college. Some people claim Annie’s hearing loss made it difficult for her to socialize, which would explain why she was so focused on her work and perhaps why she never married or have children. But she could have also been an introvert and hard worker.

After graduation she returned home to Delaware. For the next 10 years she would study photography. Kate goes into a brief history of photography in this week’s episode.

Annie experimented with a lightweight Blair Box Camera that came out of Boston, Massachusetts. When she traveled through Europe & Spain with the “Kamaret” Camera she not only took pictures with the camera but published in a book. In the Footsteps of Columbus was published by the Blair Company and distributed as a souvenir at the Chicago World’s Fair of 1893. Available to read thanks to the Library of Congress. Annie would utilize this photography knowledge later when looking at the stars. But she didn’t know that yet. After returning home for bit she wrote in her journal:

I am sometimes very dissatisfied with my life here. I do want to accomplish something, so badly. There are so many things that I could do if I only had the money. And when I think that I might be teaching and making money, and still all the time improving myself it makes me feel unhappy and as if I were not doing all that I can.

In 1894, Annie’s mother died and life at home grew more difficult. She wrote to her former instructor at Wellesley, professor Sarah Frances Whiting, to see if there was a job opening. Sarah hired her as a junior physics teacher at the college. This opportunity allowed Annie to take graduate courses at the college in physics and astronomy while also teaching. Her teacher also inspired Annie to learn about spectroscopy.

Annie’s ambitions grew past Wellesley College. In order to gain access to a better telescope, Annie enrolled at Radcliffe College as a “special student”, continuing her studies of astronomy. Radcliffe was set up near Harvard College for Harvard professors to repeat their lectures to the Radcliffe women. This relationship gave Annie access to the Harvard College Observatory.

In 1896, Edward C. Pickering hired her as his assistant at the Harvard Observatory.  This is where her career as an astronomer really began.

In 1907, Annie finished her studies and received her masters from Wellesley College. 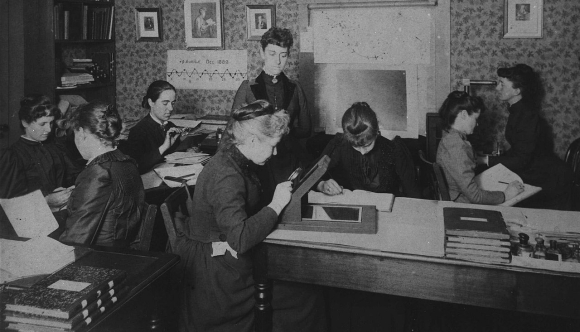 What was first called the “Pickering Women” now a days they are called the Harvard Computers. Working at the Harvard Observatory a group of women hired by Edward C. Pickering, their mission was to complete the Henry Draper Catalogue of mapping and defining every star in the sky using photography, telescopes and spectrum photography.

Men took the photographs and the women examined examined, cataloged and calculated the data. And there was a lot of data. The team would eventually amass half a million photographic plates and needing to be studied and cataloged.

Pickering as it’s said that his deciding factors on hiring women was that he could pay them less, and that men got bored with the work. There is a story that Pickering was hiring men first and he grew more and more frustrated with them eventually declaring that even his maid could do a better job. So he hired his maid. Williamina Fleming was the first Pickering women employed and she did in fact do a stellar job. She identified and classified most of the spectra in the first catalogue published in 1890 and was put in charge of the female staff that followed.

At their beginnings they look at glass plates of photographs taken by the telescopes at Harvard as well as in observatories in Peru, South Africa and New Zealand and Chile. These glass plates were 8×10 in size. The major focus was on photographing the spectra of a star.  Think of when you shine light through a prism and you get a rainbow of colors – that’s spectrum. Pickering found that if he put a prism at the front of a telescope and took a photo it would produce a tiny grey smudge on a photographic plate. Looking closely at these smudges reveals vertical black spectral lines, a bar-code of sorts of a stars chemical composition, color and temperature.

The gals would make notes on the image’s date, the exposure, and the area where it was in the sky. They would also reduce the photographs and account for atmospheric refraction – in other words render the photo to be as clear and unchanged as possible.

They would copy this data into tables. It was 6 days a week and they earned 25 to 50 cents an hour (which is half of what the men would have been paid). 12 women started. Overtime 40-80 women would work as a Harvard Computer.

Soon after Annie starting work on the new issue of the Draper Catalogue, there was a massive disagreement on how stars should be classified. Antonia Maury who was the niece of Henry Draper, you know the guy funding this, wanted a complex classification system and Williamina, our maid turned overseer, wanted a straightforward and simple approach. It was Annie who negotiated a compromise.

There were many ways to catalog a star.  There was already classification by using spectrum. Around 1870 there color table of 4 classes of stars judged by the how close or far apart the colors of the rainbow were from one another. These were called Spectral Lines.

Antonia wanted the standard to be line widths and use roman numerals. Williamina wanted expand the 4 classes and to measure the hydrogen in their spectra from A-Z with the biggest first. In fact the A-Z method that Williamina worked on is what was published in the 1890 Draper Catalogue.

Annie’s compromise was the measure them first by brightness, later as the technology developed, by temperature. This did complicate the the A-Z of hydrogen measuring so instead of throwing all of that cataloging out, she grouped the like ones together and found 6 spectral classes the letters that remained were OBAFGKM. This classification system still remains to this day. Students and astronomer’s remember the letters by the mnemonic “Oh be a fine girl (or guy), kiss me.” 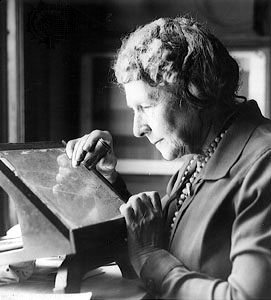 Annie manually classified more stars in a lifetime than anyone else, with a total of around 350,000 stars. She discovered 300 variable stars, five novas, and one spectroscopic binary, creating a bibliography that included about 200,000 references. She discovered her first star in 1898, though she was not able to confirm it until 1905. When she first started cataloging the stars, she was able to classify 1,000 stars in three years, but by 1913, she was able to work on 200 stars an hour. That’s more than three stars a minute just by looking at their spectral patterns. If she used a magnifying glass, she could classify stars down to the ninth magnitude, around 16 times fainter than the human eye can see. Her work was also highly accurate.

On May 9, 1922, the International Astronomical Union passed the resolution to formally adopt Annie’s stellar classification system; with only minor changes, it is still being used for classification today.

Just about every biography you come across have come across will have “She was a suffragist and a member of the National Women’s Party.” She did give a speech called “Astronomy for Women” in 1929. She did speak in the Hall of Science in Chicago on the topic of Women in Science in 1933.

Annie wasn’t in the vein of outspokenness of Susan B. Anthony or Alice Paul when it came to suffrage or women’s rights but she did stress the importance and the need for equality in her field of science and she did attend women’s meetings and write with organizers. She was more your middle of the road feminist (if there is such a thing.) She help the women she could, she inspired more women to join the sciences but she really concentrated on her work with star classifications that was her passion. She also was very much aware of the importance of men like Pickering for even having an opportunity offered to women.

In the book Madame Curie Complex by Julie Des Jardins she writes about Annie:

“And yet for all the accolades she attributed to women at the World’s Fair, she conceded that men ‘held the lead’ in ‘interpretive’ enterprises.”

Annie knew just how thick that glass ceiling was for women in science and that she wasn’t going to be the one to break it down but maybe she could crack it a little by doing stellar work.

In 1933 Annie established the Cannon Committee with money she got from the Ellen Richard’s Prize. The Cannon Committee would eventually become the Annie Jump Cannon Award now administered by the American Astronomical Society. The award is to honor women in the field of astronomy. The award is given for “Outstanding research and promise for for future research by a postdoctoral woman researcher.”

Annie was also in a Wonder Woman comic. In issue Wonder Woman #33 published in 1949 they had a 3-4 page section called “Wonder Woman of History” and Annie life and accomplishments were laid out in comic book fashion. Read more here.

Annie worked for more than 40 years classifying the stars. She died April 13, 1941 in Cambridge, Massachusetts. She was 77 years old.

So many people say such wonderful things about her, it was clear that she was a pleasure to be around, was a hard worker and did stellar work. She really did blaze a trail for more women astronomers.

Your Gal Friday is a weekly podcast with supplemental video and article profiling and amazing gal of our galaxy that we can all learn from. Each month your hosts Kate Chaplin & Phoebe Frear talk about the life and legacy about a gal in the subjects of art, history, science and culture. Winner of Best Family Podcast by Indy PopCon Podcast Awards.

[…] podcast, Your Gal Friday, Kerra was inspired to see if she could name a star after us. It was the Annie Jump Cannon episode where hosts Kate & Phoebe mention how it would be so cool to have something in space named […]

I love how her work was validated in so many arenas, and is still being utilized today! I am excited to share her story with my own science students!